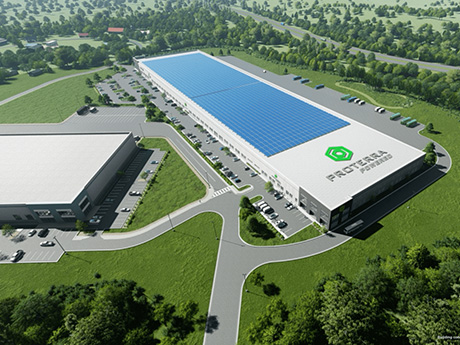 Proterra will open a 327,000-square-foot facility in Greer, S.C., for a battery system production plant to support its electric bus manufacturing facility in nearby Greenville. The Proterra project is one of several build-to-suit developments for electric vehicle manufacturers underway along the I-85 Industrial Corridor.

CHARLOTTE, N.C. — The Southeast has long been home to automotive giants such as Honda, Hyundai, Toyota and Mercedes-Benz, as well as their large network of suppliers. In 2021, BMW led the nation in automotive exports by value, the eighth consecutive year the German automaker held that distinction.

BMW produced and exported $10.1 billion worth of cars and SUVs from its mega campus in Spartanburg, S.C., last year, and the company recently announced two new facilities — one on its campus and the other across Interstate 85 — that will total $300 million in investment.

Similarly, Hyundai Motor Manufacturing Alabama, the regional headquarters and only U.S. plant for the South Korean auto giant, announced last week that it planned to invest $300 million to expand and improve its Montgomery plant. The initiative will create 200 jobs and accommodate the manufacturing of the hybrid Santa Fe vehicle line and launch of the first Electrified Genesis GV70 SUV.

Hyundai Motor Group said it aims to sell 1.87 million battery electric vehicles (BEVs) annually by 2030 in order to secure a 7 percent global market share of BEVs sold. The automaker announced on April 12 that it plans to invest $7.4 billion in its U.S. operations by 2025 to expand facilities and grow its production of EVs and hybrid vehicles.

“Some of the investment is going to North Carolina, but the lion’s share of it is going to be in Alabama. Automotive is the largest driver of industrial activity in Alabama,” said Brad Moffatt, vice president of industrial brokerage at Cushman & Wakefield | EGS Commercial Real Estate, during the closing panel at the InterFace I-85 Industrial Corridor conference. The event, which drew about 250 registrants, took place Wednesday, April 13 at the Hilton Uptown Charlotte hotel. 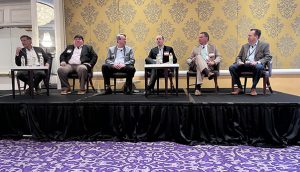 Automotive companies near and far are investing in operations along the I-85 corridor, and several of the new announcements are from companies expanding their EV production, both in terms of vehicles and EV batteries. For example, SK Innovation is building two battery production facilities along I-85 in Commerce, Ga., that will create 2,600 jobs for a total investment of $2.6 billion.

In addition to the announcement from Hyundai, the following announcements have been made by EV manufacturers in recent months:

K.C. Conway, a commercial real estate economist and futurist at Red Shoe Economics, said during his presentation that his theory is that automakers and other large stakeholders are helping remake the U.S. infrastructural network with a North-South orientation versus East-West, a trend that began with the Panama Canal expansion in 2016. 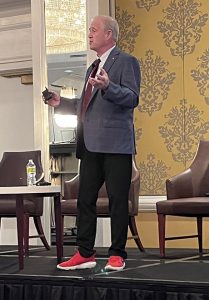 The veteran economist said that the new supply chain for most of the country will run from Canada through the Great Lakes region and down to the Gulf Coast in the Southeast and Southwest. The “Golden Triangle” network consists of rail, interstates, inland ports and seaports, including a future 272-acre inland terminal in Montgomery by the Alabama Port Authority that will be serviced by CSX Transportation and serve traffic from the Port of Mobile.

Conway said that the port investment in Alabama shouldn’t affect other ports in the Southeast because there is unmet demand in the region for better connectivity from Port of Mobile up to metro Atlanta. He said that the onshoring of production from automotive groups and other manufacturers is an essential cog in the machine to reimagine the existing supply chain, which has had some weak links globally.

“EV manufacturing is in North Carolina, South Carolina, Georgia and down to Alabama. What do they all have? Port connections, rail, affordability and workforce — all those things are here,” said Conway during his keynote address at the InterFace event.

“If you drive from Raleigh-Durham and Greensboro all the way to Montgomery, you will not see another corridor in the United States that has this kind of activity, this kind of site selection and all the logistics infrastructure,” added Conway. “The port bone is connected to the rail bone, which is connected to the e-commerce bone. There is not another corridor like this you can find.”

During the conference’s leasing and operations panel, Anne Johnson, senior vice president of CBRE, echoed Conway’s sentiment that the growth along I-85 and in the corridor’s individual markets is creating a clustering effect where markets are starting to blend.

“Basically, from Greenville-Spartanburg all the way up to Greensboro and maybe even down to Atlanta is going to be a continuous market,” said Johnson. “I do believe firmly that I-85 is the golden road. Although I-77 is a fantastic location, I-85 is the place to be.”

One major benefit of having mega automotive plants is the halo effect of industrial activity from suppliers looking to find sites near those factories. Moffatt said that as far as how automakers approach their supplier infrastructure, it depends on the company as some prefer to have third-party suppliers nearby while others want some autonomy over the trade area.

“The Korean and German automakers tend to want their supplier networks to locate close to the plants,” said Moffatt. “The Japanese companies like Honda don’t like to do this because they don’t want to compete for labor.”

A common refrain throughout the InterFace event was that fluctuating prices and a shortage of construction materials and land were hindering industrial development, but that ultimately strong tenant demand and a healthy return on investment are outweighing those concerns.

Conway explained that manufacturers and distributors such as Walmart, The Home Depot and Amazon aren’t scared off by rising construction materials prices because only 2 or 3 percent of their capital expenditures involve real estate costs.

He said during his time on the board of directors at Monmouth Real Estate Investment Corp., which was once the largest industrial landlord for FedEx, that users would enlighten him on where their priorities truly lie.

“What FedEx, Amazon and Home Depot would routinely tell us is, ‘I don’t care what the rent is, we don’t care what the cap rate is. We care about if we make a supply chain location mistake because that can cost us billions of dollars,’” said Conway. “These companies have to have the right location for their e-commerce or they’re Sears or JC Penney, they’re extinct.”